What is a Lion Fish 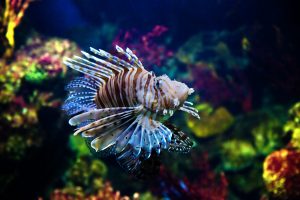 If you've never had the opportunity to be down under (literally), you truly need to know what you've been missing.While there are many possibilities the one I would like to tell you about is the Lion Fish.

The Lion Fish's Origin was the Indo Pacific where they were considered native to the area.

Lion Fish have rapidly populated, from a mated pair that got put into the Ocean during a Hurricane near Miami Florida and now appear in the Western Atlantic, the Gulf of Mexico, And the Caribbean Speculation as to how they began appearing in those areas is during a hurricane or high waves some crossed over into the additional areas Having the ability to procreate year around, and be relatively resistant to any parasites has led to an over population of its species. Having few predators also aided the rapid increase of the LionFish population.

However, lets back up a bit and talk about the Lion Fish in all its beauty. The Lion Fish as they appear to float thru the water with grace. Primary habitat is near coral reefs and rocky outcrops, which as it happens is a beautiful place to dive. The scientific name for the Lion Fish is Pterois Volitans, but it is commonly called by several different names. Zebrafish, firefish,turkeyfish, red lion fish, and ornate butterfly cod, just to name a few.

There is so much more to the Lion Fish, and simply not enough space to tell you all at once. We could go into its harmful sting and how to treat it. That they are eatable and protein based.

The poker games played using the Lion Fish, and much much more.

We will stop were we are and pick back up in the sequel to the Lion fish in the next article. Your takeaway for now should be the art and grace and beauty of this species that you can only get down under with By The Shore Scuba Instruction . Call us at 919-247-0356 or email scubainfo@scubadivingraleigh.com or our website at www.scubadivingraleigh.com.

View all posts by: Kevin Alexander